As stated in the previous post, this series of posts is working backwards, from most recent jobs to ones farther back in time, so this isn't the second deck we built, but rather the second to the last one we built.

It is also the other half of the project shown in the previous post, but on the opposite side of the sun room mentioned in the post prior to that.

This smaller deck was in really sad shape, with stair stringers rotting out, a poor, above-ground block footing which was sagging, and a tree too close, creating even more moisture to help the rotting process. Where it was anchored to the house, no flashing was used behind it, and it was starting to cause damage to the sill of the house, plus it was only nails and deck screws holding it up. 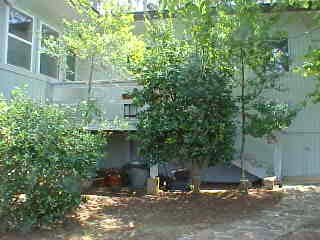 Below, you can see some of the rot as we took it apart. 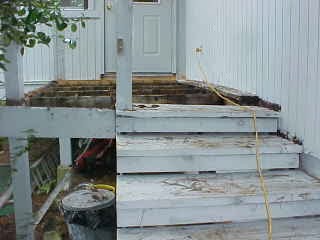 You can see in the picture below how it was starting to rot out the siding. The only way to fix this was to extend the new deck far enough to be able to cut out and/or repair this portion. 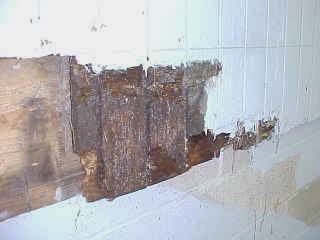 To repair this section we again had to cover the entire sill with flashing and wrap it around the corner. 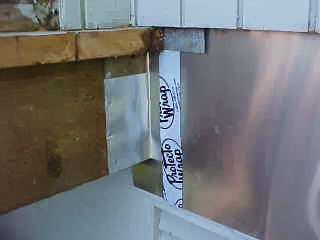 Where the bad siding had to be cut away, we had to fabricate the flashing to go around the edge of the good part to protect it. 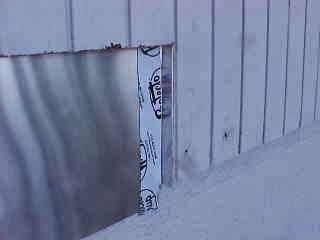 There was a total of three small trees, two of which probably came up wild, but only the bigger one had to be removed. We anchored the back end of a 2-ton hand winch to one of the larger trees near the fence line and literally winched this third tree out of the ground...roots and all. 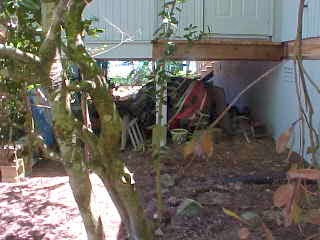 With the larger of the three trees out of the way, it was beginning to look better already. The other two may have to come out eventually, if they get too big, but for now, they provide some shade and a better visual appearance to the entire scene. 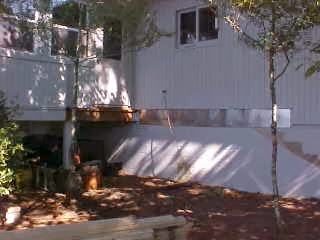 The new deck was designed so that the new stairs would extend to exactly where they needed to go, on the end of the existing slab of concrete, saving us from having to pour a whole new slab. The corner post was positioned the same way as the ones on the previous deck, with laser accuracy for centering, and dug to about 20 inches deep. The post anchor was set over an imbedded foundation bolt and then the new post was anchored to the new post base. The other two baluster posts were bolted into the deck and the outer stair stringer, with plenty of cross-blocking behind it to keep it straight. 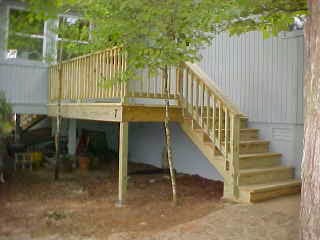 As mentioned in the previous post about the larger deck, the stairs and railings were installed using those same methods. 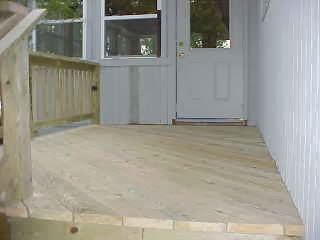 For those astute enough to wonder about how I do my top steps, I do not lean the stringers against the front joist as most builders do. That requires the top step to stick out beyond the deck and makes for an unsightly installation, as well as making it more difficult to match the railing to it. To do it right, it would require an additional baluster post at the front of the top step as well as the one in the corner of the deck. That just makes more work and expense.

Instead, I attach the stringers to the back side of that front joist, and the underside of the deck. Each stringer is lapped across extra bridging pieces, and bolted in from the sides, or else leaned against other bridging pieces (depending on which way the joists run) making them impossible to ever come loose. That way, the first step is the "real" first step down, and only one baluster post is required to match up the railing properly.

As with the other deck on the opposite side of the sun room, the deck boards were installed at 45 degrees, except these were run the opposite direction of the ones on the other side. 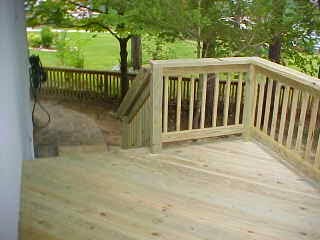 As always, every joint is properly mitered to fit the exact angle needed, whether it be around a corner or downhill at the railing. Joists were covered with special tape before the deck boards were installed, and post tops were covered with tape before attaching the top rails. Railing spacing is per code as mentioned in the previous post.

In addition to everything mentioned before, even hand rails have a code of their own, which requires them to be no less than 2-1/2 inches wide, with 2-inches clearance behind them (so you don't get your fingers caught while ascending or descending the stairs). In other words, they must be "grippable" their entire length, so you can wrap your fingers around them, and they have to be a certain height from the front of the stair treads. Using the same 2 x 8 as a continuation of the top rail of the deck does meet the code for hand rails!

For further information on how to properly build a deck as we do, read the post before this one, as well as follow up with any future posts. And if you have any questions, please leave me a comment and I will answer as soon as possible.

Thanks for reading, and I hope you were able to gather useful information.